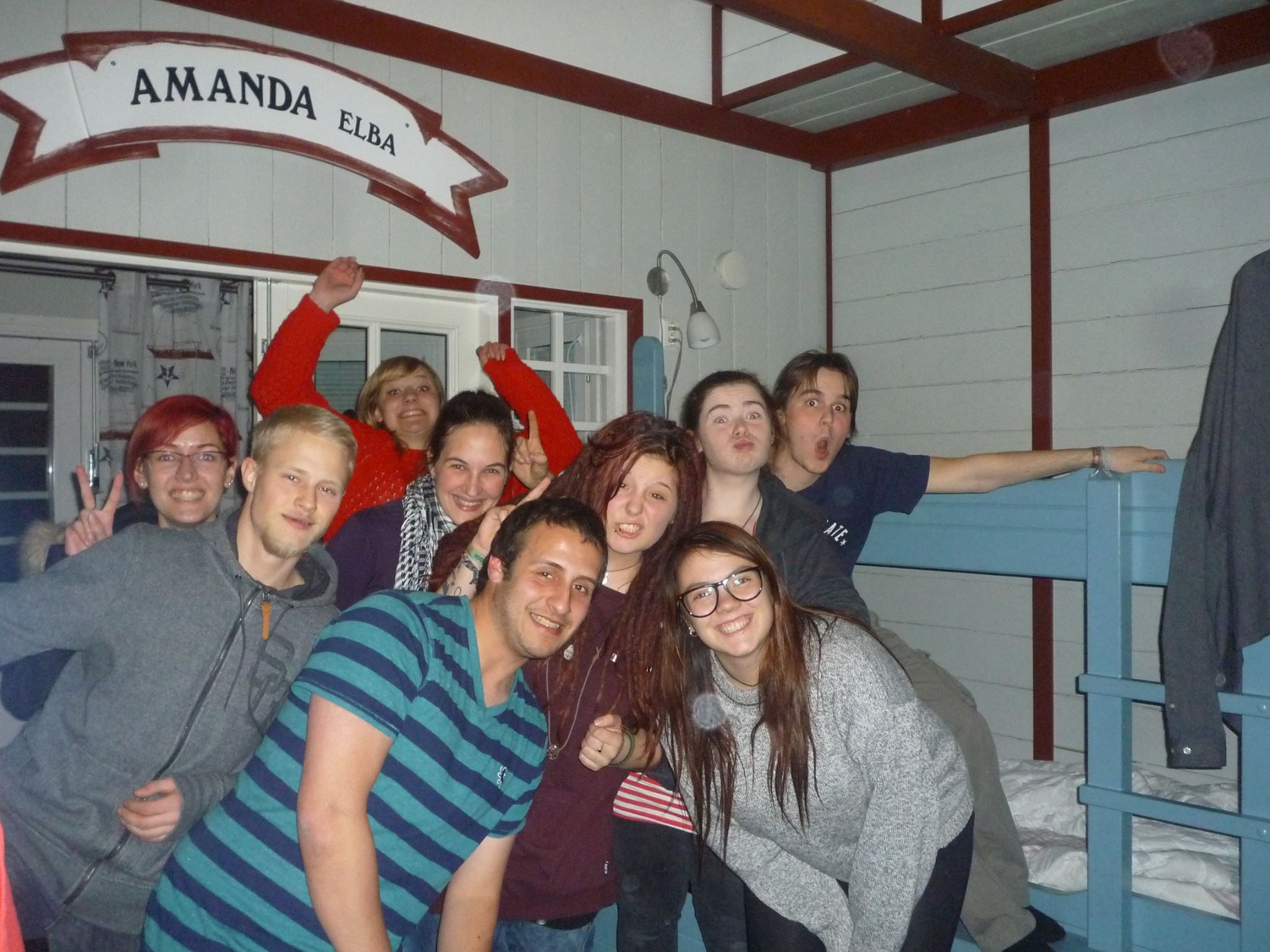 At 21:30 on Saturday 31st January, I arrived at Nuorisokeskus Villa Elba, Kokkola, Finland. The significance of this is that this was the place where I would be working as an EVS volunteer for 9 months. It was below freezing and there was snow everywhere. Immediately I was shown to my room by a Turkish volunteer called Onur and I was introduced to the girl I would be sharing the cottage with that night. Her name was Lara and she was from Spain and had travelled from her EVS project up in Lapland. We spoke for a while and then we both retired our bedrooms to get some much needed sleep.
The following morning, 17 more volunteers from across Europe arrived and we began our on arrival training. This consisted of 5 days of group exercises, a movie night where we watched a Finnish film about Santa Claus, an international evening where we shared food from our own countries and learned about our group’s diverse range of cultures, 2 Finnish lessons and excursions into Kokkola and to the nearby town of Pietersaari to see the Arctic Museum (Nanoq). At the end of these 5 days we had gone from being a group of total strangers to being a 19 strong family unit and it was difficult and very sad to say goodbye to these people.
After my on arrival training, my work began. I would be helping in 3 different departments at Villa Elba during my 9 month project. They were the International Department, the Nature School and the Service Department. Each department had several different roles for me to fulfil which meant that I would have quite a wide range of daily activities such as helping leaders run outdoor activities with primary school children, cleaning, or giving presentations in school or at Elba about my EVS project and England.
One of the best things about my project was that every few weeks there were different groups of people coming to Elba – some for one day, some for a week and some for a month. I have been fortunate enough to meet a lot of wonderful people from every corner of Europe. Every couple of months our mentor organised a meeting for myself and other volunteers to discuss how we were getting on in our different projects. There was also a mid-term meeting held just outside of Helsinki which had the feel of a retreat to it, but where we were reunited with those from our on arrival group who did not share mentoring sessions with us. The aim of this was ultimately for us to explain the good and bad things about our projects and to set ourselves objectives to achieve in the remainder of our projects.
I was also able to do some travelling while I was in Finland. My first trip was to Torino, Italy to see friends I had made in Finland. My second trip was to Inari, Lapland for a mentor meeting where we spent 3 days in the far north of Finland. My third trip was a long weekend in Helsinki and Tallinn with friends from my on arrival group. I also managed to do some day trips to Oulu and Tampere.
In the beginning of summer I had the great pleasure of being driven around Kokkola by a friend in her red 1964 Ford Mustang and then at the end of the summer being taken to her Summer cottage just outside the city where I was able to try my hand at Jet Skiing. Recently I saw the Northern Lights which were well worth the 7 and a half month wait! Throughout the summer months there was 20-24 hour sunlight which made the summer nights feel extra special.
Finally, I have less than one month left here now and I constantly find myself wishing I could stay for longer. Since I arrived I have seen a transformation in my confidence, especially when meeting new people but also when talking to large groups. Furthermore I have managed to learn some Finnish, but be warned it is a very hard language to get to grips with. I have had the honour of working with a greatly talented and kind group of people who have made me feel at home here and I have also made friends with some people who I will simply never forget.